Even the press knows we have style. The Art of the Southern connection February 27, 2019

The chef and sixth-generation Floridian walked into Splitsville Southern + Social, the upscale bowling alley and restaurant at Tampa’s new Sparkman Wharf, with his arms full: eggs from his farm in Jasper. He handed out a couple half-dozen containers, told us to wash them before eating.

Smith, 58, was Oprah’s personal chef for years, until 2007. He has cooked for the Obamas, and Florida governors. He has won two James Beard awards. He was the chef at Joanne Trattoria, a Manhattan restaurant Lady Gaga’s parents opened in 2012.

But what you really need to know is he’s the kind of guy who brings people he has never met fresh eggs from his farm.

We sit down outside of Splitsville, which has been revamped with a more modern design aesthetic and the new menu from Smith, and look out at the water and the shipping containers housing eateries from some of Tampa’s best chefs.

He got into Tampa the night before, staying at the food-centric Epicurean Hotel. He ate dinner with some local friends at Cheese Please in South Tampa because James Nozar, CEO of Strategic Property Partners (the folks behind Sparkman Wharf), recommended it.

It took about seven minutes for him to mention Oprah. And former Florida Govs. Bob Graham and Jeb Bush.

“When you’re in food and working for powerful people, you all know each other,” he says, then pauses.

“I always say it’s okay to drop names if you actually know the person. If not, it’s tacky.”

Being a personal chef for famous people has allowed him to focus on food projects he is passionate about, like Common Threads, a healthy cooking program for at-risk kids that’s celebrating its 15th anniversary this year. It’s based in Austin, Texas, but has a large presence in Miami, and Smith says he’d like to bring it to Tampa one day.

“I’m not here to just cook fried chicken,” he says.

Fried chicken is indeed Smith’s thing. This month, he guest-judged a fried chicken competition on Top Chef. It’s a big part of the menu at Homecomin’ Kitchen, the Florida-focused restaurant he opened in the rejuvenated Disney Springs a couple of years ago. And it shows up at Splitsville, too, hot honey chicken biscuit sliders, a fried chicken plate called Tampa Hot Chicken. (His other favorites? The deviled eggs, and the fried green tomatoes, and the hot sauce, which is made in-house with Fresno peppers.) There is a giant chicken painted on the wall near where we’re sitting.

She wanted some fried chicken, Smith brought his Southern roots to bear on a version she loved, and soon Oprah was eating it on her daytime talk show.

This was about 15 years ago, and Smith says back then other chefs called his chicken “housewife food” and didn’t take it seriously.

He likes simple food steeped in tradition. He talks a lot about the Cuban influence in Tampa, places like Ybor City that retain a sense of authenticity. And then he says this: “Miami is going to kill me, but I think the best Cuban sandwich in the whole state is in Tampa.”

“It’s a tiny spot, like a small square place,” he says, using his hands to draw a square. “I went with this young handsome Cuban politician. I wanted to go get one of their sandwiches today. Hang on.”

He sends a text, says the Columbia Restaurant’s Cuban is also very good, then tells me how he went to Cuba and cooked for the Annenberg Foundation, which turns into a story about how he was invited by “some very fancy people” recently to see Hamilton in Puerto Rico.

Oh, the sandwich: It was from West Tampa Cafe, a small spot off Armenia Avenue with framed pictures of politicians on the wall.

“I love restaurants that have a sense of place and age,” he says.

He mentions Tampa longtimers like Bern’s Steakhouse, across the street from where he’s staying, and the Columbia. Other Florida cities like Orlando and Jacksonville don’t have quite that kind of food history, he says.

“All of that helps to build Tampa as a community.”

We talk about Florida cuisine, and how it is distinct and how in many ways it is not. He mentions Norman Van Aken and others who through their cooking style brought awareness about what was fresh and local in this state. “It’s such a fast-growing state — we all contribute in beautiful ways. A Cuban sandwich is just as much Florida as anything else.”

Meyer lemons grow robustly where he lives in North Florida, and a local farm store makes lemon bars that “Martha Stewart would be jealous of.”

I assume he is also close personal friends with Martha, but I don’t ask. We have moved on to more stories about Oprah.

He tells me about the night Oprah hosted a dinner party and invited then-Sen. Barack Obama and his wife, Michelle. (Smith is currently one of Michelle’s chefs on her Becoming book tour; next stop, Austin.) He mentions the celebrity-studded launch party of Oprah’s book, The Wisdom of Sundays, a couple of years ago. He was in charge of the food, fried chicken and Southern sides like collards and macaroni and cheese. Attendees included Julia Roberts and Shonda Rhimes.

“Oprah is a very spiritual person,” he says. “Sundays were the only day the world wasn’t after her. She kept that very reverent.”

We talk about Cardi B and Black Panther (“Angela Bassett is a good friend”), bond over a shared love of the Puerto Rican dish mofongo. As we sample some deviled eggs, he starts singing along to a Backstreet Boys song playing on the overhead speaker. 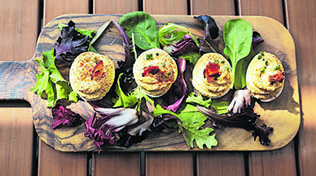 He tells me to visit the Greyfield Hotel on Cumberland Island in Georgia (“very nice”), a favorite spot of his originally built for the Carnegie family and used for John F. Kennedy Jr.’s wedding.

“I just did reservations for Will Smith,” at Smith’s restaurant Southern Art and Bourbon Bar in Atlanta, he says.

He thinks of five things he’s grateful for each day, he tells me, and rattles off a list for today’s Tampa trip that includes warm weather, nice people and the “beautiful” bed he slept in last night. He talks about being mindful of how much we have, how much others don’t, how everything we do has an effect on other people. Some of Oprah’s wisdom.

“She says all of this helps for a better world.”

Smith and his Venezuelan-born husband, Jesus Salgueiro, live with their adopted kids in a historic mansion in Jasper, near the Georgia border. He says that after lots of recent traveling, he’s enjoying being in his home state. He wants to get back to Key West soon, go hiking in the Everglades, visit Cedar Key and Pensacola.

We get back to talking about Tampa and Splitsville, and the air-conditioned respite it provides for the folks walking around outside. He was happy to lend his name to the restaurant. Smith admires the idea behind Sparkman Wharf, digging the shipping containers that offer customers a way to get good food in a less fussy setting.

“I don’t want to open restaurants just to open them anymore,” he says. “I’d like to do it if there’s a need. And I would love to see more restaurants open for less money.”

He compares it to independent movies, and the intimacy and simplicity of them.

“When you travel, people are always eating on the street. We should get more into that.”

He has heard about Tampa’s food halls, and loves that idea, too. More mom-and-pops, he says. More limited menus.

“People are always trying to make things contrived when I think simple works best,” he says.
Smith can be seen walking around the dining room at Homecomin’ Kitchen often. My dad still talks about how Smith served him his fried chicken once.

“I’m the Mickey!” Smith says. “You know, I think I’m a pretty good chef, but people want someone they can see and talk to.”

I wonder if he’s going to be at Splitsville as often.

He does love bowling, he says. And movies. It’s the Friday before the Oscars. I ask him if he’s going to watch.

The Art of the Southern Connection – Tampa Bay Times